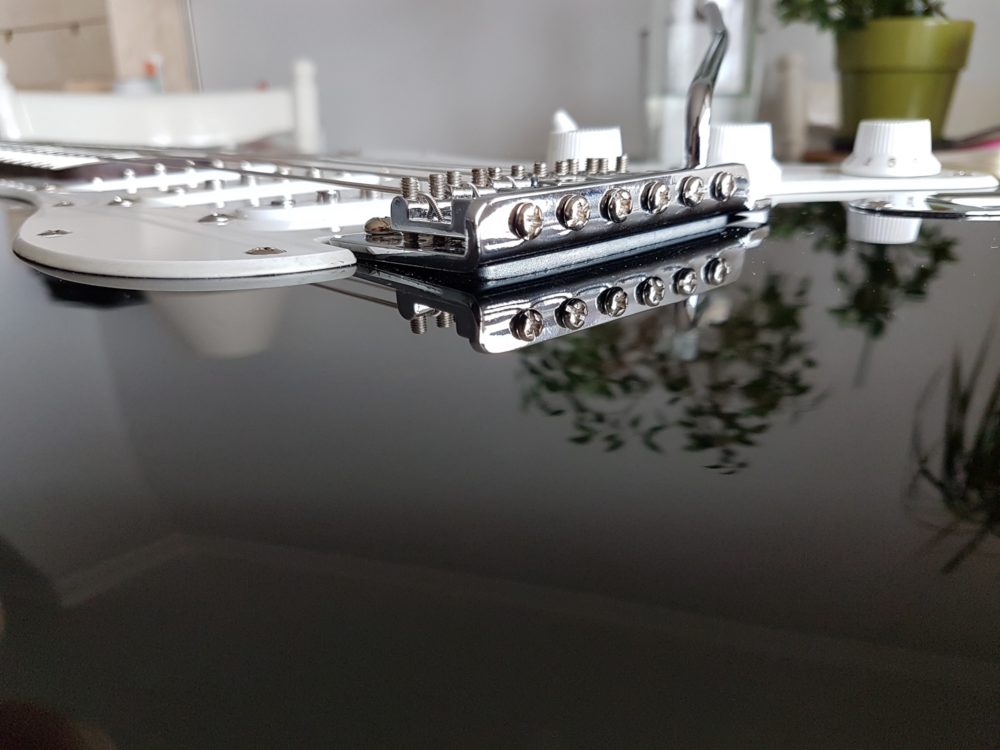 Instead of having a fixed bridge, some guitars are equipped with a tremolo, an ingenious system to change the pitch of a note. There are few different models of tremolo, but the most famous are probably the Fender Strat Tremolo and the Floyd Rose system.

Floyd Rose and Fender bridge systems are both based on a quite delicate balance bewteen strings and springs tensions. To get the full functionality out of a tremolo bridge, it’s vital to take great care also of other aspects of the guitar as nut slots, strings and overal structural stability of the instrument, in other words, all the other variables that can play a role on the tuning stability.

The Fender tremolo bridge, in particular, can be set floating at many different angles from the body (like the example in the picture below) or, instead, flush with the body.

Interestingly enough, at a different angle will correspond a different tension of the strings (similarly to what a tail piece does on a fixed bridge, think of a Les Paul for example).

Contrarily to the common opinion, a tremolo sitting on the body won’t deliver a better tuning stability if you still use the trem arm. Instead, it will be very precise if totally blocked but, obviously, will lose completely its functionality of vibrato bridge.

Challenging part of a setup and haunting ground for every guitar player is getting a good tuning stability when using  a tremolo system. Personally, I’m a big fan of the Fender Tremolo unit in floating position: that’s where the Strat sound comes from (for my ears, at least).

An old-but-gold tip: once your bridge is set, stretch completely your strings or the tremolo will do it for you during your very next performance and without asking your permission. This step alone will sensibly reduce the chances of going out of tune. Here the how-to.